The Learned Courtesan in Edo Japan 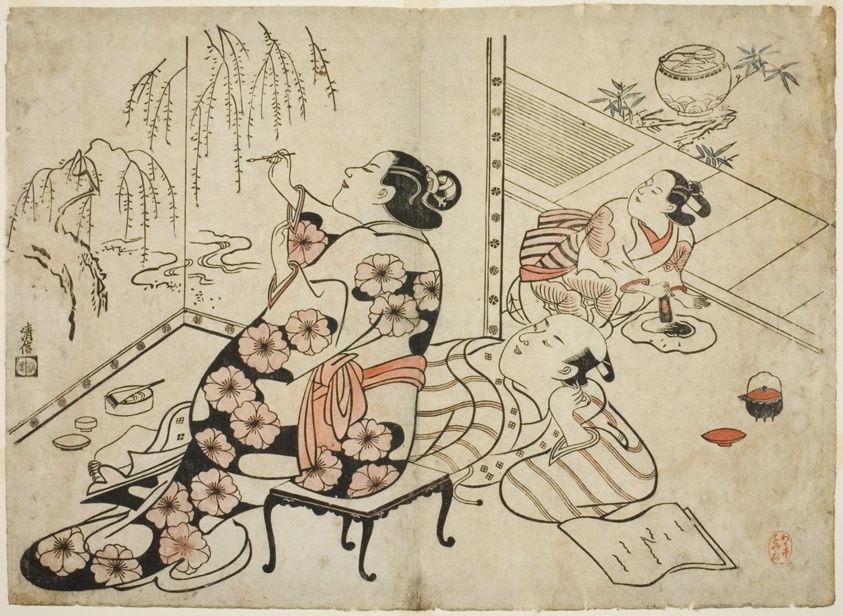 Edo-era Japan witnessed a kaleidoscope of popular culture known as ukiyo, or “the floating world.” Sex and culture workers alike labored in pleasure districts, or yūkaku. Artists represented them in prints and paintings called ukiyo-e.1

Edo society, spanning 1603 to 1867, maintained strict class hierarchies. Sex workers, most of them women, worked out of goverment-licensed yūkaku as well as unlicensed pleasure districts. These neighborhoods, such as Yoshiwara in Edo (modern-day Tokyo) and Shinmachi in Osaka, contained brothels, tea houses, kabuki theaters, and other entertainment.2 As in many other societies and eras, sex workers occupied a peripheral, stigmatized position.3 At the same time, the highest-ranking courtesans were considered cultural trendsetters. Some of them achieved fame and wealth through their ability to impress patrons with their erudition, charm, and artistic abilities.

A block print from the 1700s captures the popular Edo-era imagination of sex workers. It shows a married woman, young girl, and domestic worker. They watch as two courtesans in fine kimonos walk by with a teahouse proprietor. Viewers can tell the women’s marital status and status as laborers based on their kimonos.4 The non-sex working women gaze at the elegantly clad courtesans with fascination. Yet the courtesans are also visually and socially separated from the others. The print demonstrates both the stigma and prestige of elite sex work. 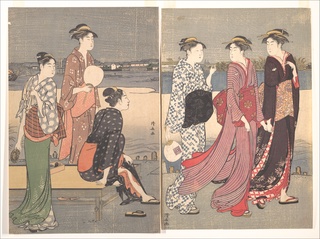 Many sex workers, or yūjo, came from poor families and entered brothels as children, where they experienced a form of debt bondage. The brothels were hierarchical. They had an elaborate ranking system of courtesans that granted them honorific titles based on their skills. The most talented girls received musical, literary, and artistic training. The top-ranked courtesans were called oiran, and the highest-ranking oiran were called tayū. Oiran labored alongside other cultural workers such as geisha in the pleasure districts.5 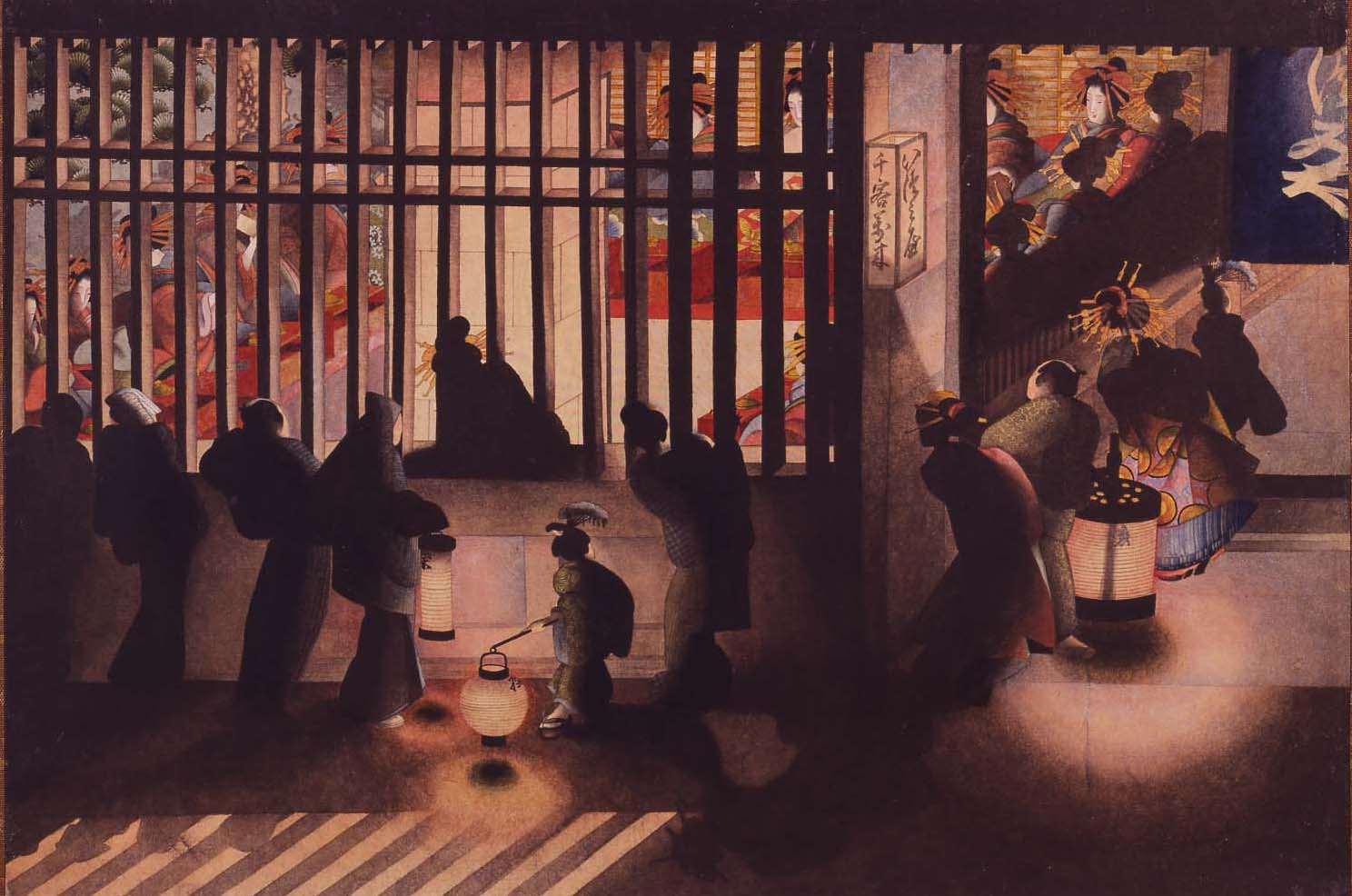 Katsushika Ōi, Courtesans Showing Themselves to the Strollers through the Grille, ca. 1818-1860. Õta Memorial Museum of Art. In this painting of courtesans in a pleasure quarter, lamplight and shadows spill upon backlit figures standing on a street.

Ukiyo-e artists also created visual puns, called mitate-e, that parodied concepts within Zen Buddhism.7 These images inserted renowned spiritual teachers into profane scenes. By doing so, they illustrated the Buddhist teaching that all wordly appearances are an illusion.8

The Edo period saw a rise in literacy as more people moved to urban centers and enjoyed popular entertainments like reading novels. Scholars estimate that, by the end of the Edo period, up to two-fifths of men and one-sixth of women could read and write.10 Ukiyo-e prints frequently portray women reading and writing.11 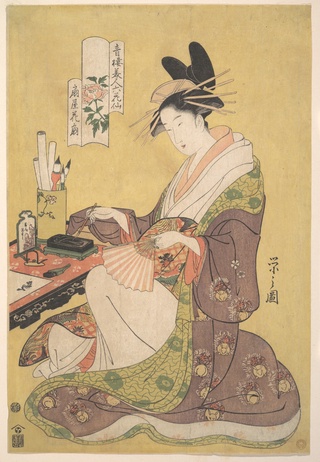 High-ranking courtesans were more able to devote time to art and literature than their lower-ranked counterparts. They practiced calligraphy, a venerated artform associated with poetry and Buddhist culture in Japan. Albums with the theme of “beauties of the pleasure quarters” sometimes drew on tropes from Japanese literary history. In one series, for example, artist Chōbunsai Eishi created a series of block prints casting oiran in the role of the rokkasen, or “poetic immortals.” The rokkasen were six famous Japanese poets of the ninth century.12 Eishi punned on the word for “poetic,” calling the courtesans the “six floral immortals” instead. One of the floral immortals, Hanaōgi, is shown intently practicing calligraphy at her desk.13 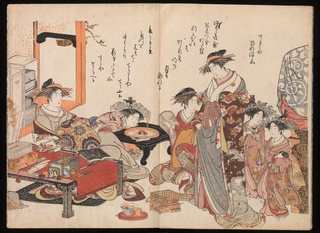 Male literati assembled albums focused exclusively on the calligraphic skill of oiran. Some literati collected calligraphy directly from the most accomplished oiran of the day in the form of long handscrolls. Other literati illustrated the courtesans themselves, then asked them to add examples of their calligraphy to these portraits.

These albums demonstrate oirans’ dedication to their art.14 They also play on the tactile quality of calligraphy. The album—marked by the courtesans’ skilled hand—becomes a stand-in for their sensual touch. 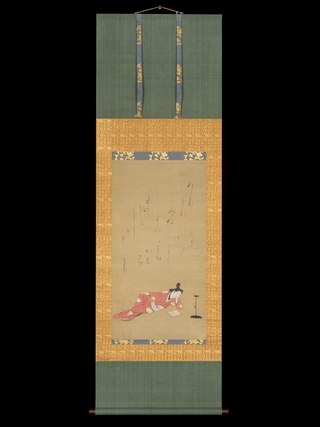 Courtesans composed poems, or wrote out other authors’ poems, in their best calligraphy. They were doubtlessly aware of the piquant charm their calligraphy could exert on an admirer.

One ukiyo-e print by an unidentified artist depicts the courtesan Moshio, of Kyoto’s Shimabara pleasure district. The artist probably painted her from their imagination, making the image a kind of fan art. At some point—one can imagine, perhaps, the artist presenting Moshio with her portrait during a pleasure session—the courtesan copied out a poem above the image of her reclining form.

Japanese monk-scholars commonly inscribe calligraphic poems onto other artists’ depictions of famous spiritual figures. Moshio’s inscription on her own portrait creates a similar dialogue. By evoking the tradition of monk-scholars, the Moshio print also implies an analogy between sages and sex workers.

Oiran were both subjects of spiritual imagery and creators of it. The highest-earning oirans could be patronesses of local temples, as in one ukiyo-e image of the courtesan Takigawa painting a votive offering.15 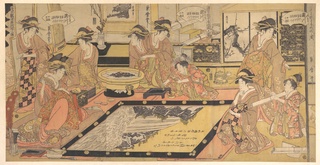 1
A Votive Picture to Be Donated to the Kannon of Asakusa (Asakusa Kannon hō kakegaku no zu), by Takigawa of the Ōgiya, Kamuro Menami and Onami, with Tomikawa, Kumegawa, Tamagawa, Tsugawa, Utagawa, and Kiyokawa
19th century

Ukiyo-e artists included courtesans in mitate-e scenes. These prints and paintings used Buddhist myth and symbolism to celebrate and parody piety. They demonstrated the sublimity present even in those deemed most vulgar. The images substitute courtesans for bodhisattvas or show legendary sages fawning over courtesans. 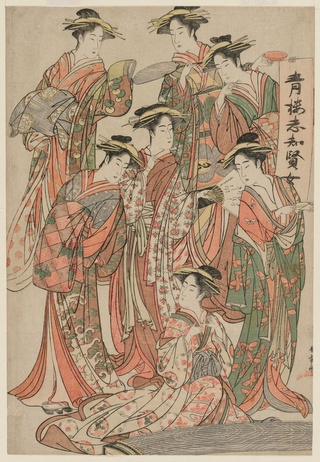 Jigoku Dayū, the “Hell Courtesan” commonly depicted in ukiyo-e prints, embodies the oiran as a spiritual and artistic figure. The courtesan gained her name when the Buddhist monk Ikkyū patronized the brothel where Jigoku Dayū worked. In one version of the legend, the two exchanged poetry, and the monk was impressed by the oiran’s learning and skill. In another version, Jigoku Dayū tested Ikkyū’s commitment to asceticism by sending dancing women to entertain him. Jigoku Dayū spied on Ikkyū only to find that the women had turned to skeletons and were dancing with the monk. From that time on, she wore a kimono patterned with images from Buddhist hell as a reminder of the transience of worldly things.17 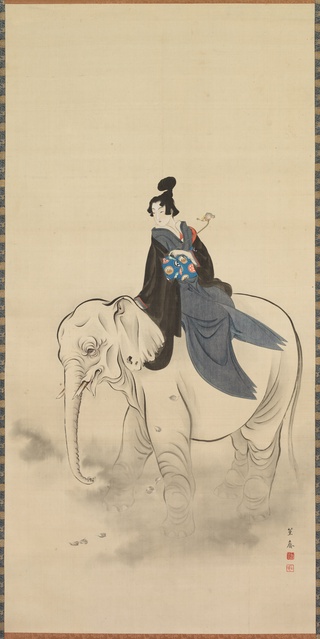 The myth of Eguchi similarly reveals the spiritual power of sex work. When a monk visited Eguchi, she revealed herself to actually be a manifestation of the bodhisattva Fugen (known as Samantabhadra elsewhere in Asia). In Buddhist iconography, Fugen’s vehicle is a white elephant. Ukiyo-e artists frequently depict courtesans riding white elephants as mitate-e of Fugen. Scholar Ikumi Kaminishi argues that Eguchi is “a sacred agent of entertainment who blurs the boundary between the divine and profane.”18 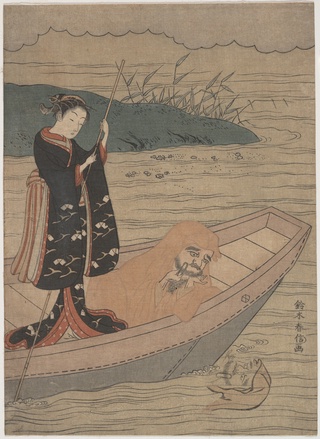 1
Daruma in a Boat with an Attendant
18th century

During the Edo period, people used “daruma” as a vernacular word for courtesan, and “darumaya” for brothel.19 Daruma is the Japanese name for Bodhidharma, a semi-mythic Buddhist monk credited with founding Zen Buddhism. Some ukiyo-e prints depict Daruma in comical scenes with sex workers. In one print, for example, Daruma leans over the edge of a boat to see his reflection in river water, plucking his chin hairs with a tweezer as a courtesan rows. Images of sex workers with Daruma indicted societal hypocrisy,20 but also suggested that the sensual is part of the sublime.

The majority of sex workers in Edo Japan, as in most societies, did not produce written or artistic records of their lives. The quality of life of Edo sex workers was largely dictated by the conditions of their brothel, and their status within that brothel’s hierarchy. In contrast to the refined portraits of oiran, one print of a non-elite sex worker shows the woman earthy and disheveled. She wears a relatively plain garment that exposes her breasts.

In the 1880s, middle-class Japanese Christians began a campaign urging the government to outlaw sex work. The American occupation, which ruled Japan from 1945 to 1952, also pushed to ban the industry. Proponents of criminalization prevailed in 1955, when the post-occupation Japanese government outlawed sex work. This was despite the protests of sex workers’ unions. As a result of the prohibition, licensed brothels closed. However, many of them continue to offer sex work while ostensibly functioning as inns.21

At the same time, artists created modern ukiyo-e prints that reflected increasing foreign influence and changing gender norms. Kawakami Sumio created prints of Japanese courtesans with foreigners in Western Lamp, Foreigner, and Courtesan (before 1962) as well as Nambanesque Behavior (1955). “Nanban” is a Japanese word for barbarian or foreigner, usually European.

Kainoshō Tadaoto played on the “beauties of the pleasure quarters” theme in a 1929 self-portrait. In the work, titled Primavera (Haru), the artist depicts himself as an oiran. The title references Italian Renaissance painter Sandro Boticelli’s Primavera, an allegory of spring. Tadaoto further evokes Boticelli’s painting in the floral patterns on the kimono and carpet. Tadaoto was one of the only publicly gay Japanese artists in the 1920s.22 This queer self-portrait challenged the dichotomy between the male printmaker and the female sex worker by depicting oiran and artist as one. Tadaoto’s print affirms the long lineage of feminine people who knew that sex work was an art—and that art is often a form of sex work.

Sabia, Stefania. “13 Different Types of Kimono for Women and Where to Wear Them.” tsunagu Japan, 9 May 2022, https://www.tsunagujapan.com/10-different-types-of-kimono-for-women/. Accessed 21 June 2022.

“The Watchers and the Watched.” The Metropolitan Museum of Art, https://www.metmuseum.org/art/collection/search/54569. Accessed 24 June 2022.

“The Courtesan Hanaōgi of the Ōgiya Brothel (Ōgiya Hanaōgi), from the series Beauties of the Pleasure Quarters as Six Floral Immortals (Seirō bijin rokkasen).” The Metropolitan Museum of Art, https://www.metmuseum.org/art/collection/search/55044. Accessed 24 June 2022.

“A Votive Picture to Be Donated to the Kannon of Asakusa (Asakusa Kannon hō kakegaku no zu), by Takigawa of the Ōgiya, Kamuro Menami and Onami, with Tomikawa, Kumegawa, Tamagawa, Tsugawa, Utagawa, and Kiyokawa.” The Metropolitan Museum of Art, https://www.metmuseum.org/art/collection/search/36668. Accessed 24 June 2022.

“Daruma in a Boat with an Attendant.” The Metropolitan Museum of Art, https://www.metmuseum.org/art/collection/search/54867. Accessed 24 June 2022.

“Daruma in a Boat with an Attendant.”