Murals on Blast Walls: Legacies of an Occupation Built on Shifting Truths 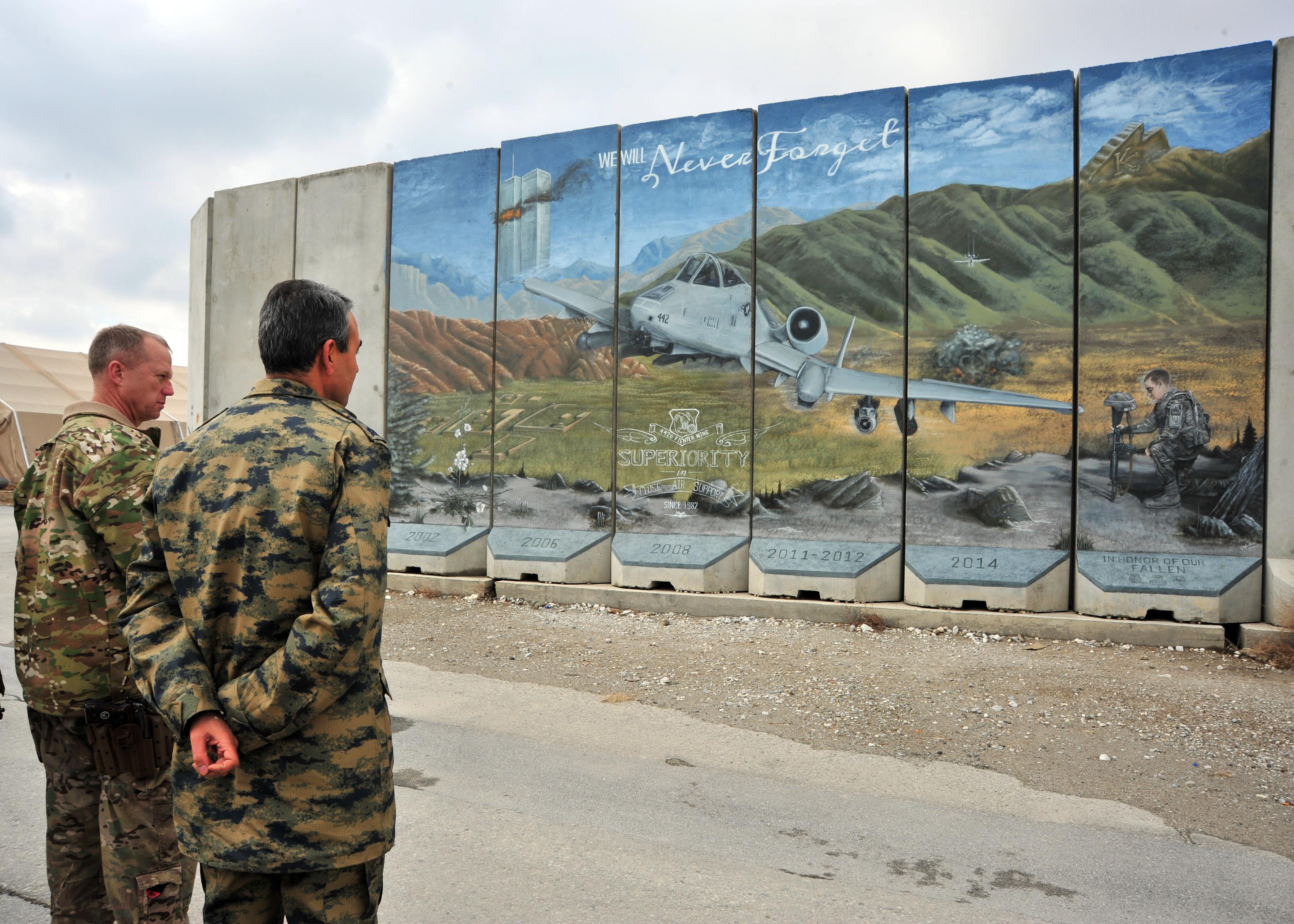 Blast walls not only alter the urban fabric of Kabul but also highlight the contradiction inherent to the narratives created around the American occupation of Afghanistan.

The American occupation of Afghanistan physically altered the local urban landscape with the introduction of giant cement walls used for security. The walls also came to serve as a canvas for both American military staff and local artists, whose works, when seen in relation to each other, help make visible the contradictions of the war and its many truths.

In a scene worthy of a Hollywood blockbuster glorifying war, an A-10 Thunderbolt expands its wings across four blast walls standing shoulder to shoulder, flying directly towards the viewer. Occasional clouds dot the clear blue sky above, while newly sprouted spring life covers the hills. In the distance, behind the mountains, the World Trade Center's twin towers still burn, relocated from Manhattan or made visible from Afghanistan by the artist's magic wand. With the famous phrase "We Will Never Forget" inscribed next to the towers, the relatively empty Afghan terrain is hard to ignore. The sole human presence in the vast landscape that stretches across six different blast walls is that of an American soldier at the bottom right corner, kneeling in front of a battlefield cross.

Occupations come and go, or at least that is what the recent history of Afghanistan would attest to. In the past half century, the country witnessed two violent occupations. Both were sold through the construction of a narrative, or narratives, that helped disguise the brutalities of these wars. But these narratives only held firm until they could no longer bear the weight of their own contradictions. In the case of the fresh wound that is the United States occupation of Afghanistan, which George W. Bush called an act of generosity towards the oppressed people of Afghanistan,1 the signs were always there that this was no gift but a violent invasion, a truth conveniently ignored until its catastrophic conclusion in 2021.

This mural's visual and material choices bare consequential truths about the occupation. American Air Force SRA Omar Martinez painted his mural in 2014 upon the 20-foot-tall cement walls surrounding the Bagram Airfield near Kabul, which served as the United States' biggest military base in Afghanistan. At its peak, Bagram hosted 40,000 military personnel and civilian contractors and resembled "a small town, with traffic jams and various retail and food outlets, including Burger King, Subway and Pizza Hut."2 It came to represent the bullish force of the occupation and its economic and militaristic might, and to hide its darkest secrets under the daylight.

Facing inward towards the base, Martinez's painting was one of many wartime murals that appeared across the ugly cement blast walls that separated this American-built military utopia from the residents of Bagram. With his audience clear, Martinez's mural reveals his understanding of the myth that had taken him more than seven thousand miles from his native Kansas. Even almost 13 years into the American occupation, Martinez not only saw his presence in Afghanistan as part of a revenge mission but was also unable to visualize his immediate surroundings and society as anything but a barren land devoid of any life. This gives us a glimpse into the often ignored truth that the American occupation of Afghanistan was built upon the dehumanization of its local inhabitants, who were presumed to lack any agency, culture, or visible existence. Martinez's inability to see the people surrounding him could be a symptom of the orientalist ideologies that constructed both the narratives behind the occupation and the giant walls the war required. While protecting him from the effects of the war that he helped wage, the barriers also impeded his ability to see his surroundings, leading him to construct textbook propaganda.

Referred to as Bremer walls or T-Walls, ranging from three to seven meters in height and hugely heavy, the monstrous barriers that served as Martinez's canvas became a widely recognized symbol of American occupation and its destructive legacies in both Afghanistan and Iraq. Roughly 40 miles from Bagram, the capital city of Kabul witnessed an immense number of these ugly concrete walls erected all over the city, marking the strangulation of public space and its privatization at the hands of foreigners and their local partners. In what Tim Weiner calls "the essence of counterinsurgency: to separate the good guys from the bad guys, and to impose political will to convert or defeat the enemy,"3 these brutally simple gray walls effectively destroyed the urban fabric of the city. Streets and neighborhoods were made inaccessible to the general public to not only protect those who claimed to guarantee the country's security but also allegorically mark those outside the walls as “the bad guys.”

The abandoned American Embassy, now effectively a living monument to the failures of the occupation, is located in the Wazir Akbar Khan district of Kabul. As a heavily guarded area, Wazir Akbar Khan was home to foreign embassies, civil and military offices, and local and foreign NGOs that Charles Montgomery best summarized as an "archipelago of high-security compounds.”4 As you can guess by now, the outward face of the American embassy was constructed of the architectural monstrosities that are giant cement walls. Continuing the bizarre marriage of blast walls and art, the towering walls at the embassy entrance were covered in a huge mural by a local group called ArtLords. The mural depicted a young girl dressed in her black and white school uniform looking directly at the viewer as she writes in a notebook. With colorful rays brimming around her, a short text to the right reads, "I am the future of Afghanistan." While there is no doubt that the message behind this mural is noble and that every child in Afghanistan deserves a right to education, the context of the work twists its meaning. With the ghostly embassy watchtower lurking behind the mural, it presents the side of the narrative behind the American occupation that was sold to the Afghan people, one that Sahar Ghumkhor and Anila Daulatzai brilliantly refer to as a "romanticized offering of foreign occupation" through "indicators of girls in school, women working (as if this alone indicates anything) or the joys of listening to music, fashion or skateboarding."5 The artist group, coincidentally also formed in 2014, have made a career since as "wartists" and "artivists" in their noble quest for "converting the negative psychological impact of blast walls on the people of Kabul into a positive visual experience."6

While a thorough critique of the ArtLords' practice, which often leans more towards advertisement than art, is beyond this essay, it’s important to highlight their role in whitewashing the violence inherent to these walls. Placing ArtLords works next to Martinez's mural helps us see the fluctuating truths that helped propel and sustain the American occupation of Afghanistan. Where Martinez saw no humanity around him beyond his fellow soldiers inside the walls, ArtLords romanticized the occupation as the agent of prosperity illustrated through the ever exhausted image of the Afghan child whose supposed bright future is constantly traded upon by all sides involved in the war.

While no amount of paint would ever beautify what is inherently ugly and violent, or undo the torment of the local psyche, the murals give us a glimpse into the power and contradictions of the narratives that came from these walls. If any more proof is needed that these murals served an ideological purpose, look no further than the Taliban's decision to cover the ArtLords' mural with their own propaganda, and the United States’ decision to destroy the murals in Bagram as it retreated.

Montgomery, Charles. “The Archipelago of Fear.” The Walrus, 14 October 2019, https://thewalrus.ca/the-archipelago-of-fear/.