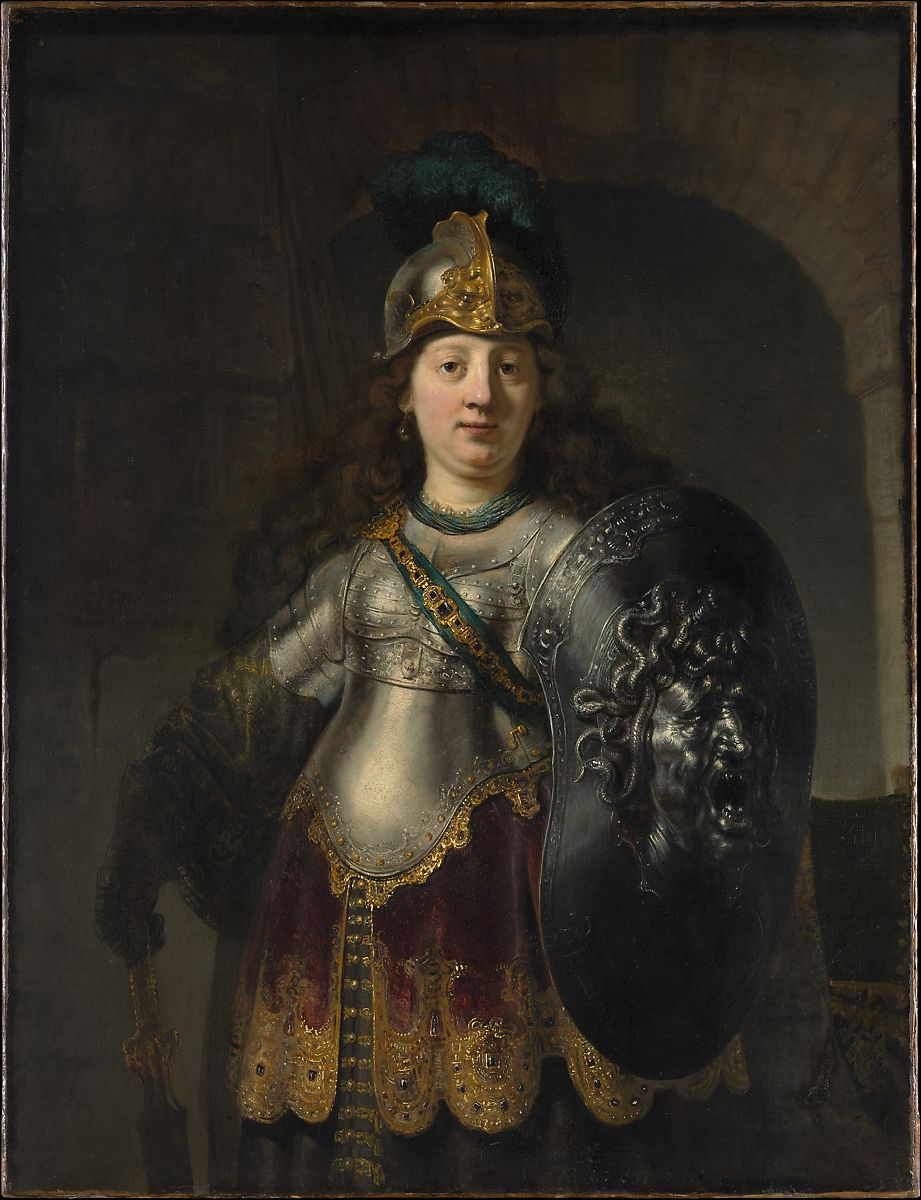 War is overwhelmingly a man’s game. This, at least, is what both modern-day wars and 12,000 years of archaeology tell us.1 Most cultures in recorded history have been patriarchal.2 Yet many cultures worship female warrior goddesses like the Hindu goddess Durga, or tell stories of martial women like the Amazons of Greek myth.

How do we understand this gap between patriarchal reality and representations of militant female divinity? Depictions of warrior goddesses, typically by male artists, often exhibit idealized aspects of feminine power. Durga, for example, is a ferocious mother goddess, demonstrating cultural beliefs connecting maternal, sexual, and martial energy. Athena, on the other hand, is a virgin goddess, suggesting a cultural framework that dichotomizes women’s sexuality and military might.

Perhaps, by relegating female military power to the realm of the divine, patriarchal cultures can maintain strict boundaries for everyday women. Similarly, patriarchal cultures may invoke myths about valorous women from the distant past, like Queen Zenobia in Europe, to comment on present-day issues. By studying representations of martial goddesses and mythical women warriors, we can gain insight into different cultures’ relationships to female power.

For many Hindus, the goddess Durga represents embodied shakti, or divine feminine power. She is the fierce form of Parvati, Vishnu’s female consort. 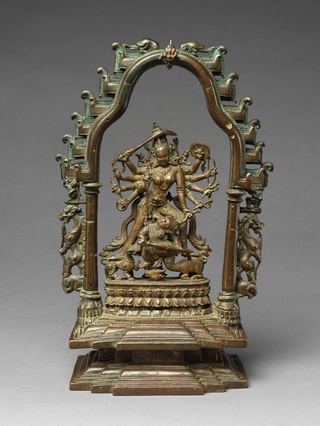 Here, she takes the form of Mahishamardini, the demon slayer. She carries a sword and shield, among other weapons. This bronze icon would have been kept in a temple or by an elite person for private worship.3

The Evolution of Athena

Athena, the patron saint of Athens, is the Greek goddess of war. Equivalent to the Roman goddess Minerva, she also presides over wisdom, handcrafts, and, ironically, peace. She is considered a virgin goddess.

By tracing representations of Athena at different moments in European art history, we can observe changing conceptions of women’s relationship to battle. 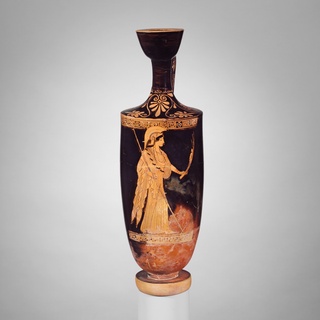 Ancient Greek representations like the one above tended to emphasize Athena’s dignity and strength, often as a form of worship. This image of Athena on an oil jug celebrates recent Athenian naval victories. In contrast to the feminine goddess, ancient Greek men prevented actual Greek women from owning property or participating in politics or combat. 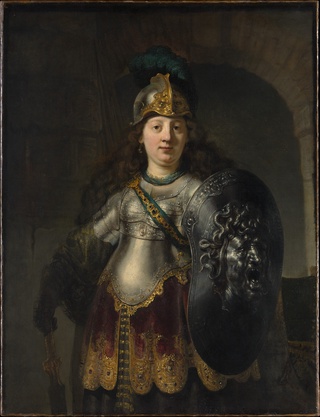 16th-century Dutch painter Rembrandt represents Bellona, a Roman goddess of war related to Athena and Minerva, as a contemporary woman. Her flowing hair marks her as feminine, but her full armor indicates nobility and a fighting spirit. At the time, Holland was engaged in the Eighty Years’ War with Spain, so this image may be Rembrandt’s attempt to inspire the Dutch people.4 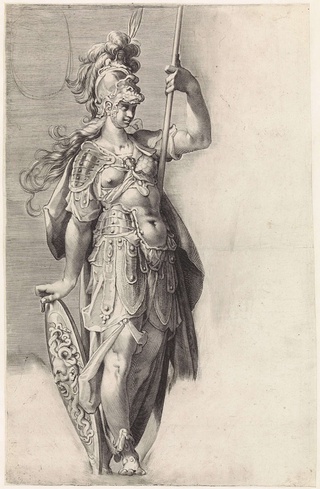 In contrast, this 16th-century Dutch engraving of Minerva characterizes the goddess as feminine, even coquettish. Like the “boob armor” worn by today’s women superheroes, her armor offers little to no protection. Instead, it plays up her breasts, contrasting the protective metal with her vulnerable, exposed body. 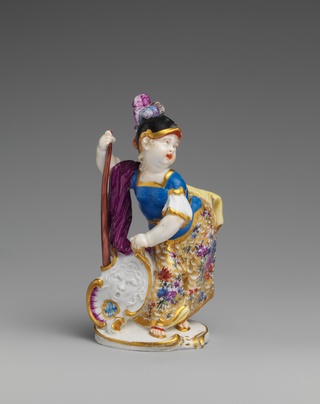 This 18th-century, late Baroque porcelain Minerva takes the feminization of the goddess to an absurd, even humorous extreme. Here, the helmet may as well be a feathered hat. The shield and sword become props for the caricatured goddess to show off her plump body.

In Europe, artists have often chosen to represent mythical or semi-mythical women heroines, often in contrast to contemporary gender norms. The ancient Greeks invented myths of the Amazons, an entirely female, warlike society. 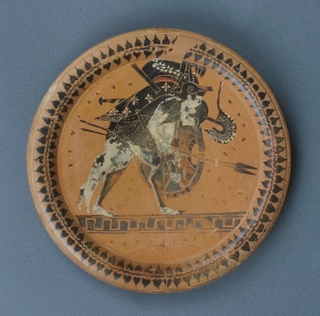 In this image on a terracotta plate, a fully armored Amazon carries her fallen comrade out of battle. It’s a striking image of solidarity between women. 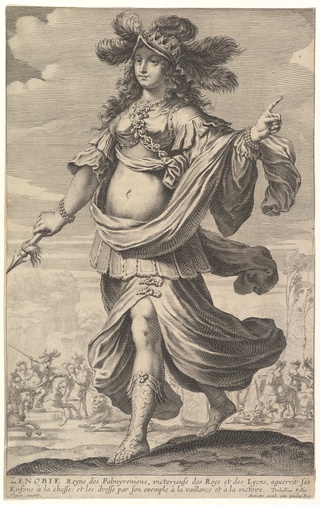 This engraving of Queen Zenobia, or Znwbyā Bat Zabbai, casts the historical queen as a semi-mythical embodiment of virtue. Znwbyā Bat Zabbai ruled Palmyra, a Roman client state in what is now Syria, in the 3rd century CE. She led an uprising against the Romans and lost.

In this 17th-century European engraving from a book depicting courageous women, Znwbyā Bat Zabbai is depicted as brave and noble. Yet she is still given feminine charm. Her armor reveals the shape of her breasts and the indentation of her bellybutton.

Martial goddesses and myths embody the contradictory attitudes toward women common in patriarchal cultures. Worshippers and artists may revere them while deriding or erasing their flesh-and-blood counterparts. Depending on the cultural moment, artists may depict martial goddesses as fearsome and noble or trivial and even coquettish.

Men in positions of authority are often the ones who represent women, whether historical or divine. How might the images in this article be different if their creators were women?

Of course, women warriors aren’t just a myth. From women revolutionaries to nationalist icons, many historical women across cultures have defied patriarchal norms and picked up arms. These women often won great acclaim.