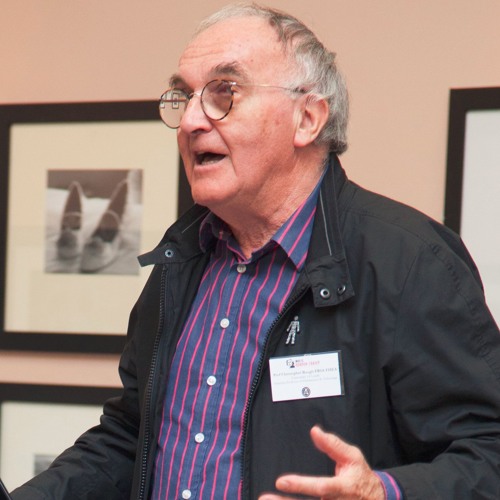 This work is licensed under a Creative Commons Attribution-NonCommercial 2.0 Generic license.

Christopher Baugh FHEA FRSA is Emeritus Professor of Performance and Technology at the University of Leeds and has taught scenography in university drama and theatre departments in Manchester, London Goldsmiths’, Kent and Hull. As professional scenographer he has worked in Bristol, California, Oregon, Manchester, London, and with the Abbey Theatre, Dublin winning a New York Drama Critics Tony ‘best staged play’ award for The Borstal Boy. Christopher was resident scenographer with Mecklenburgh Opera (1987-1997) winning the Prudential Award for Opera, and he designed the Terezin operas (Der Kaiser von Atlantis and Brundibar) for them and for BBC Television. His writings include: Garrick and Loutherbourg (1990); ‘Stage Design from Loutherbourg to Poel’ in Joseph Donohue (ed.) The Cambridge History of British Theatre, Vol. 2, (2004). ‘Philippe de Loutherbourg: technology-driven entertainment and spectacle in the late eighteenth century’ in the Huntington Library Quarterly, (2007); and, ‘Scenography and Technology 1737-1843’ in Jane Moody & Daniel O’Quinn (eds.) The Cambridge Companion to British Theatre, 1737-1843, (2007). His book Theatre, Performance and Technology: the development of scenography in the 20th century (Palgrave, 2005) was nominated and short-listed in 2007 by the United States Institute of Theatre Technology (USITT) for a Golden Pen Award. The book went to its enlarged 2nd edition in 2014. He has just written on Wagner, Fuchs, Craig and Appia for The Routledge Companion to Scenography (ed. Arnold Aronson) forthcoming in 2017 and has written numerous articles and book chapters on Edward Gordon Craig. In 1997, Christopher curated the Exploding Tradition exhibition on Craig at the V&A Theatre Museum and delivered the Gordon Craig Lecture for the Society for Theatre Research in 1998. He was a founding director of the Society of British Theatre Designers (SBTD). He chaired the panel preparing the subject benchmark statement, Dance, Drama and Performance for the Quality Assurance Agency (2000-2007), and he was Chair of the Drama, Dance and Performing Arts sub-panel for the UK Research Assessment Exercise, RAE2008. Christopher served as Deputy Convenor of the research assessment panel in creative and performing arts in Hong Kong in 2014, and is currently the Deputy Convenor of the Creative and Performing Arts research assessment panel for the New Zealand Tertiary Education Commission (2018). He was elected a Fellow of the Royal Society of Arts in 2005, and a Fellow of the Higher Education Academy in 2007.

Christopher Baugh, Edward Gordon Craig, 50 Years On by Who is Gordon Craig? is available in the public domain via Creative Commons Attribution-NonCommercial 2.0 Generic .