These two flintlock pistols, made from ivory and ebony, were produced as collectors’ items. Made only in Maastricht, these ivory-stock pistols were unlikely to have been fired due to the high value of the materials from which they were produced. The two male heads in Romanesque helmets on the handles and the wolf faces on the gun stocks may be references to Romulus and Remus, the mythological twin founders of ancient Rome who were said to have been raised by a mother wolf. The contemporary notion of “imperialism” has its roots in the expansionist policies of the Roman Empire.

The pistols were acquired by Chicago businessman George F. Harding, Jr. Harding made his wealth in real estate and became a prominent local politician who represented Illinois at the Republican National Convention of 1936. He created a museum for his extensive personal collection of munitions and armor in an addition to his home that continued to operate after his death in 1939. After Harding’s museum closed, its collections were given to the Art Institute of Chicago in 1982.

Pair of Flintlock Pistols is available in the public domain via Creative Commons Public Domain Dedication .

Thomas Hart Benton was a Democratic senator from Missouri whose support of policies favoring westward expansion was absolute. Benton was a moderate on the question of slavery, which resulted in his loss to a pro-slavery opponent following his support of the Compromise of 1850. At his defeat, he was the longest-serving senator in history, having served five separate terms. Benton’s influence was felt as well in the prominent career of his son-in-law, the expansionist explorer and mapmaker John Charles Frémont.

German-American painter Emanuel Gottlieb Leutze created this study for a mural enshrining the concept of Manifest Destiny within the US Capitol Building in Washington, DC. A family of white settlers are shown perched atop a rocky outcropping. A patriarch gestures toward an empty desert landscape, while the women of the wagon train coddle infants and the other men make repairs and pitch camp. The artist expressly connects American settlers heading west with the Bible story of Moses by depicting the Biblical Israelites in the border details surrounding the painting. The implication is that the undeveloped territory of the American West is an uncontested gift from God to settlers of European descent, whose passage will be sufficiently protected to allow even small children to make the journey.

This portrait of western expansionist John Charles Frémont depicts one of the most powerful advocates for Manifest Destiny. Frémont was an explorer and mapmaker whose mission for the US Topographical Corps was to draft a range of possible routes from the Midwest to the Pacific. The son-in-law of Missouri expansionist senator Thomas Hart Benton, Frémont represented California in the US Senate and also ran for President as a candidate for the emerging Republican Party in 1856. Frémont also fought for the Union in the American Civil War. 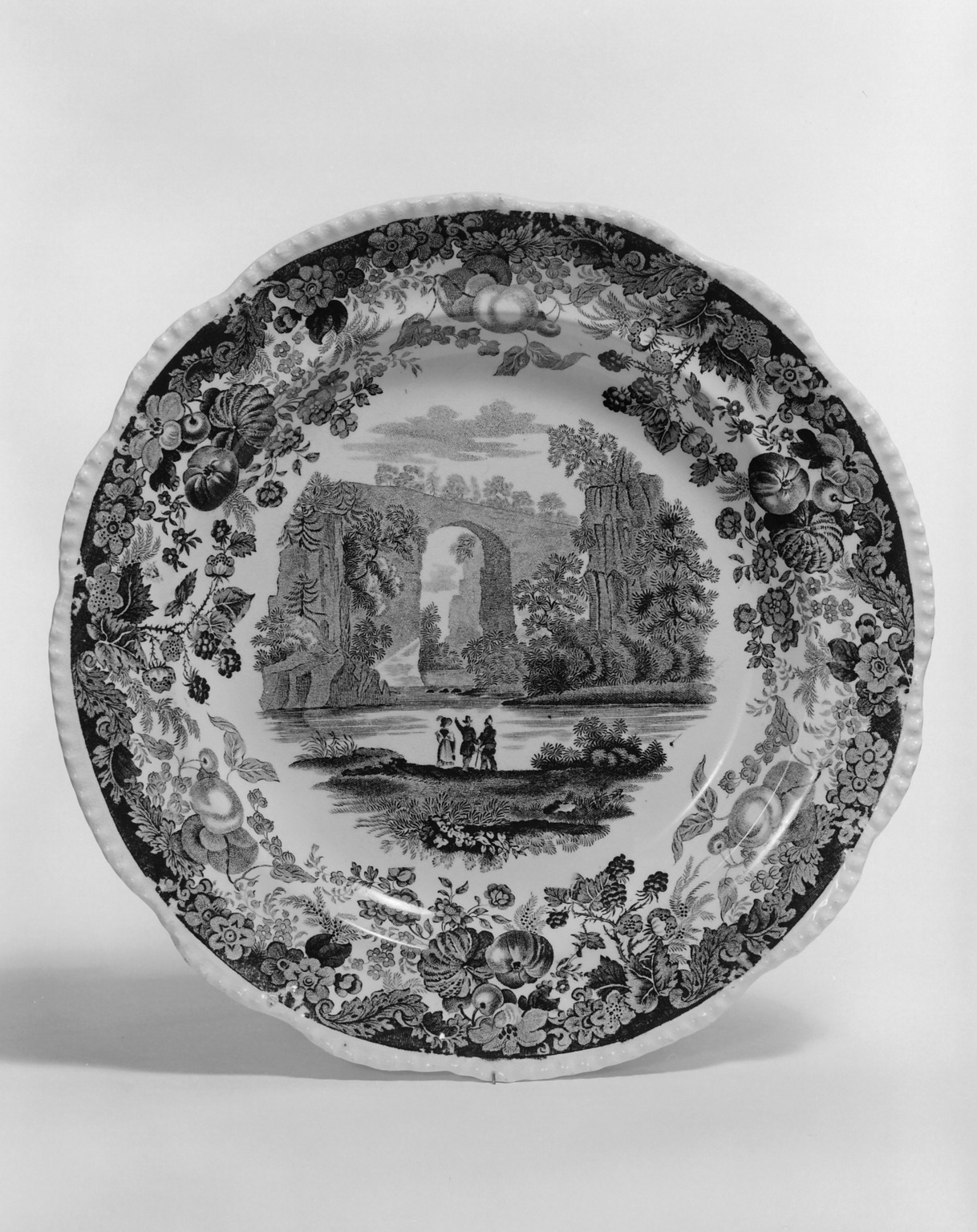 Decorative ceramic plate produced in a British factory for a US market, using an engraved plate printed on paper and then transferred to the earthenware body. The gray-and-white image shows a civilian man and woman and a soldier with helmet and sword standing on a riverbank, with a large natural land bridge in the middle distance behind them. The shores are lined with trees and plants, while flowers and leaves adorn the plate’s bordered edge.

This glass compote dish was used to serve preserves and desserts. The nineteenth century Philadelphia firm Gillinder & Sons made a number of these dishes depicting romanticized scenes of the western frontier, topped with subservient Indigenous male figures. Middle class fears about Indigenous “savages” were at once inflamed and soothed by these kitsch objects. Decorative arts showing scenes of westward expansion reinforced a sense of domination as the natural order of things both within the family and the larger community, while women contributed to the economic agenda of Manifest Destiny by consuming American-made goods in the home.

Shooting for the Beef

The steer at the left of this image is both the prize to be won and the inevitable victim of the men who compete to shoot a target nailed to a withered tree in the lane outside this frontier outpost’s rough-hewn “post office/grocery”. This display of marksmanship identifies its participants as dominant over the landscape as well as the livestock depicted in the scene. Masculinity is tightly bound with settler ambitions under Manifest Destiny, as in the figure of Daniel Boone, in whose namesake Boone County, Missouri, the painting is set. Dogs in the scene make reference to hunting but also to the loyalty that frontiersmen were expected to display to both country and family while spending long periods alone in the undeveloped west.

Shooting for the Beef is available in the public domain via Creative Commons No Known Copyright .

This black-and-white photograph shows Cape Horn, along the Columbia River north of Portland, Oregon. This image was taken by Carleton Watkins at the farthest end of his four-month journey to photograph the trail of the Oregon Steam Navigation Company freight train line. Though Watkins may have been commissioned to create this image for the commercial benefit of the company, his images of train tracks extending into undeveloped American landscapes in the west became closely associated with the values of exploration, extraction, and development encouraged by Manifest Destiny. Watkins’ use of strong shadow and light echoes the rhetoric of divine right to the land from the landscape painters who were his contemporaries. Although there was no direct connection, both Watkins and the Hudson River School painters celebrated the natural beauty of the landscape and advocated for its preservation while embracing the idea that European-Americans had the sole right to make decisions about the land.

Cape Horn near Celilo is available in the public domain via Creative Commons Public Domain Dedication .

Twilight in the Wilderness

In his New York studio, Church painted this spectacular view of a blazing sunset over wilderness near Mount Katahdin in Maine, which he had sketched during a visit nearly two years earlier. Although Church often extolled the grandeur of pristine American landscape in his work, this painting appears to have additional overtones. Created on the eve of the Civil War, the painting's subject can be interpreted as symbolically evoking the coming conflagration. Church's considerable technical skills and clever showmanship contributed to his fame as the premier artist of his generation. Rather than debut this painting in an annual exhibition with works by other artists as was the custom, Church instead exhibited it by itself at a prestigious art gallery. Coaxed by advance publicity and highly favorable press reviews, several hundred spectators flocked to admire it during its seven-week run.

Twilight in the Wilderness is available in the public domain via Creative Commons Public Domain Dedication .

A Storm in the Rocky Mountains, Mt. Rosalie

Hudson River School painter Albert Bierstadt made changes to the Rocky Mountain landscape he painted, from rearranging the site’s natural features to introducing a name of his own, “Mt. Rosalie,” in honor of Rosalie Osborne Ludlow, whom he would marry in 1866. Painted at the height of Bierstadt’s fame, this work shows what is today Mt. Evans in Colorado and reflects the emerging influence of media including photography and cinema on American expectations of wilderness. Bierstadt’s technical skill rendered his dramatic images more convincing and believable despite the liberties that he took with geography and atmosphere. His use of naming reflects the painter’s certainty of his right to both the land and the woman, who was the former wife of Fitz Hugh Ludlow, a writer who traveled with Bierstadt to the Rockies in 1863-64. A nearby mountain in the Front Range of the Rocky Mountains still bears the name “Mt. Bierstadt.”

A Storm in the Rocky Mountains, Mt. Rosalie is available in the public domain via Creative Commons No Known Copyright .