A mountain is a large landform that rises above the surrounding land in a limited area, usually in the form of a peak.[1] A mountain is generally steeper than a hill. Mountains are formed through tectonic forces or volcanism. These forces can locally raise the surface of the earth. Mountains erode slowly through the action of rivers, weather conditions, and glaciers. A few mountains are isolated summits, but most occur in huge mountain ranges.

High elevations on mountains produce colder climates than at sea level. These colder climates strongly affect the ecosystems of mountains: different elevations have different plants and animals. Because of the less hospitable terrain and climate, mountains tend to be used less for agriculture and more for resource extraction and recreation, such as mountain climbing.

Mountain Landscape with a Watermill

Mountain Landscape with a Watermill is available in the public domain via Creative Commons Attribution-ShareAlike 3.0 Unported . 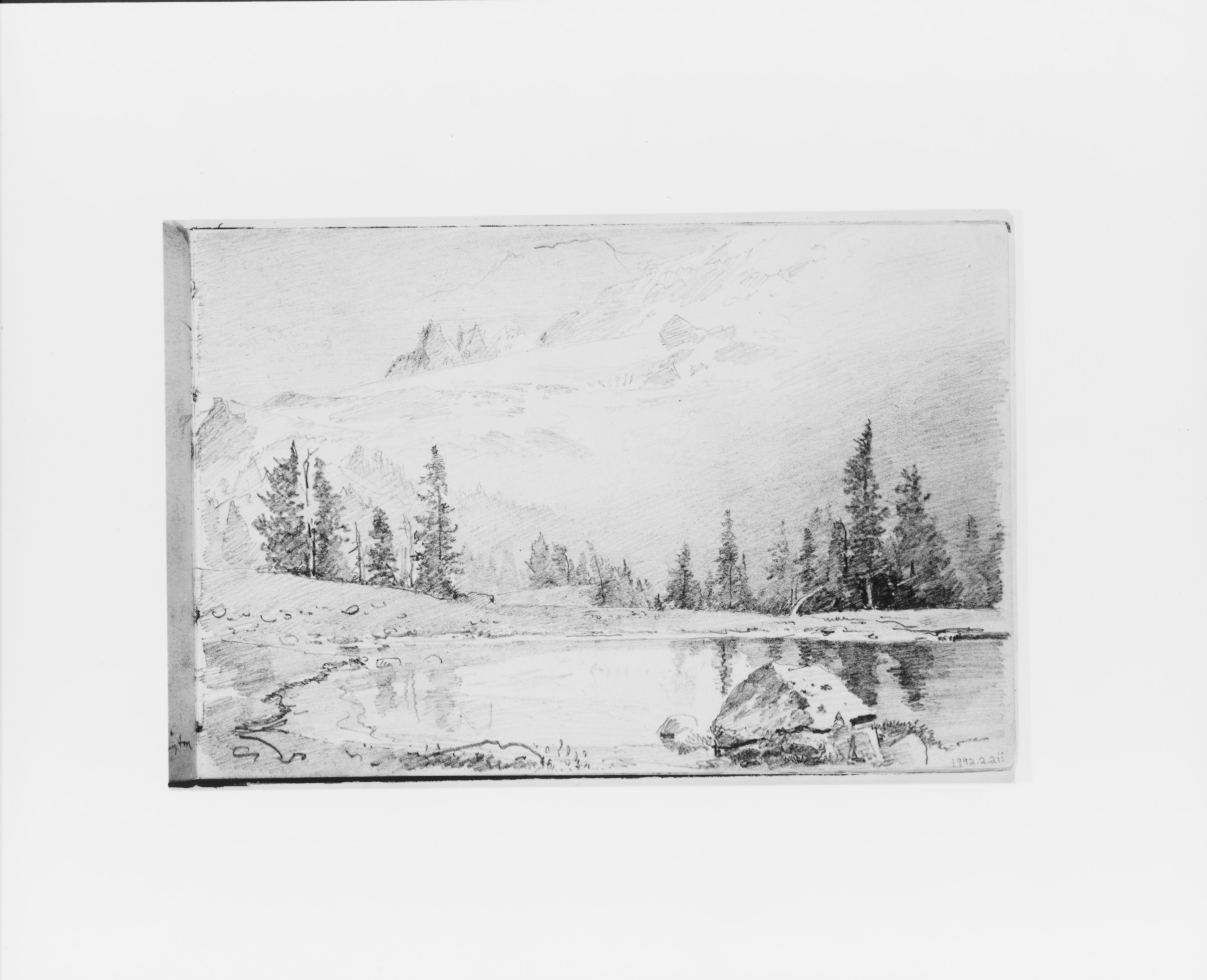 Mountain Landscape with Lake in Foreground [Mount Tacoma?] (from Sketchbook X) is available in the public domain via Creative Commons Public Domain Dedication .

Landscape painting, also known as landscape art, is the depiction of landscapes in art – natural scenery such as mountains, valleys, trees, rivers, and forests, especially where the main subject is a wide view – with its elements arranged into a coherent composition. In other works, landscape backgrounds for figures can still form an important part of the work. Sky is almost always included in the view, and weather is often an element of the composition. Detailed landscapes as a distinct subject are not found in all artistic traditions, and develop when there is already a sophisticated tradition of representing other subjects.

The two main traditions spring from Western painting and Chinese art, going back well over a thousand years in both cases. The recognition of a spiritual element in landscape art is present from its beginnings in East Asian art, drawing on Daoismand other philosophical traditions, but in the West only becomes explicit with Romanticism.

Landscape views in art may be entirely imaginary, or copied from reality with varying degrees of accuracy. If the primary purpose of a picture is to depict an actual, specific place, especially including buildings prominently, it is called a topographical view.[1] Such views, extremely common as prints in the West, are often seen as inferior to fine artlandscapes, although the distinction is not always meaningful; similar prejudices existed in Chinese art, where literati painting usually depicted imaginary views, while professional court artists painted real views, often including palaces and cities.[2]

The word “landscape” entered the modern English language as landskip (variously spelt), an anglicization of the Dutch landschap, around the start of the 17th century, purely as a term for works of art, with its first use as a word for a painting in 1598.[3] Within a few decades it was used to describe vistas in poetry,[4] and eventually as a term for real views. However the cognate term landscaef or landskipe for a cleared patch of land had existed in Old English, though it is not recorded from Middle English.[5]

Seated Female Nude, Resting her Head in her Hand

Turkish Woman at her Embroidery Frame

A Pelican and other Birds near a Pool, Known as ‘The Floating Feather’

Portrait of a Member of the Van der Mersch Family